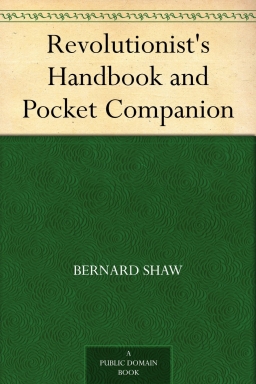 Shakespeare and the Modern Stage

A revolutionist is one who desires to discard the existing social order and try another.

The constitution of England is revolutionary. To a Russian or Anglo–Indian bureaucrat, a general election is as much a revolution as a referendum or plebiscite in which the people fight instead of voting. The French Revolution overthrew one set of rulers and substituted another with different interests and different views. That is what a general election enables the people to do in England every seven years if they choose. Revolution is therefore a national institution in England; and its advocacy by an Englishman needs no apology.

Every genuine religious person is a heretic and therefore a revolutionist.

All who achieve real distinction in life begin as revolutionists. The most distinguished persons become more revolutionary as they grow older, though they are commonly supposed to become more conservative owing to their loss of faith in conventional methods of reform.

Any person under the age of thirty, who, having any knowledge of the existing social order, is not a revolutionist, is an inferior.

Revolutions have never lightened the burden of tyranny: they have only shifted it to another shoulder.