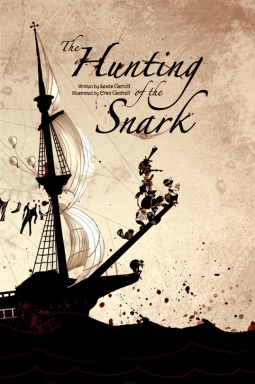 The Land of the Blue Flower

The Legend of Sleepy Hollow

The Magic of Oz

The Scarecrow of Oz

The Hunting of the Snark (An Agony in 8 Fits) is typically categorized as a nonsense poem written by Lewis Carroll, the pen name of Charles Lutwidge Dodgson. Written from 1874 to 1876, the poem borrows the setting, some creatures, and eightportmanteau words from Carroll's earlier poem "Jabberwocky" in his children's novel Through the Looking Glass (1871).

Henry Holiday, the illustrator of the poem, thought of it as a "tragedy".

The plot follows a crew of ten trying to hunt the Snark, an animal which may turn out to be a highly dangerous Boojum. The only one of the crew to find the Snark quickly vanishes, leading the narrator to explain that it was a Boojum after all. The poem is dedicated to young Gertrude Chataway, whom Carroll met at the English seaside town Sandown in the Isle of Wight in 1875. Included with many copies of the first edition of the poem was Carroll's religious tract, An Easter Greeting to Every Child Who Loves "Alice".

The Hunting of the Snark was published by Macmillan in the United Kingdom in late March 1876, with illustrations by Henry Holiday. It had mixed reviews from reviewers who found it strange. The first printing of The Hunting of the Snark consisted of 10,000 copies. There were two reprintings by the conclusion of the year; in total, the poem was reprinted seventeen times between 1876 to 1908. Carroll often denied knowing the meaning behind the poem; however, in an 1896 reply to one letter, he agreed with one interpretation of the poem as an allegory for the search for happiness. Scholars have found various meanings in the poem, among them existential angst, an allegory for tuberculosis, and a mockery of the Tichbourne case. The Hunting of the Snark has been alluded to in various works and has been adapted for musicals, opera, plays, and music.

After crossing the sea guided by the Bellman's map of the Ocean-a blank sheet of paper-the hunting party arrive in a strange land, and the Bellman informs them of the five signs of a Snark: its "meagre and hollow, but crisp" taste; a habit of rising late and taking breakfast during five o'clock tea; its slowness in taking a jest"; a "fondness for bathing-machines"; and its ambition. The Bellman warns them that some Snarks are highly dangerous Boojums, causing the Baker to faint. Once revived, the Baker recalls that his uncle warned him that if the Snark turns out to be a Boojum, the hunter will "softly and suddenly vanish away, and never be met with again." The Baker confesses that the notion of this sudden vanishment brings him much distress.

Little Saint Elizabeth and Other Stories

The Game of Logic