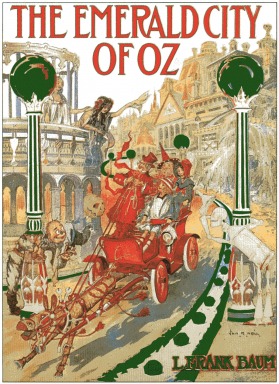 The Land of the Blue Flower

The Legend of Sleepy Hollow

The Magic of Oz

The Scarecrow of Oz

The Emerald City of Oz is the sixth of L. Frank Baum's fourteen Land of Oz books. It was also adapted into a Canadian animated film in 1987. Originally published on July 20, 1910, it is the story of Dorothy Gale and her Uncle Henry and Aunt Em coming to live in Oz permanently. While they are toured through the Quadling Country, the Nome King is assembling allies for an invasion of Oz. This is the first time in the Oz series that Baum made use of double plots for one of the books.

Baum had intended to cease writing Oz stories with this book, but financial pressures prompted him to write and publish The Patchwork Girl of Oz, with seven other Oz books to follow.

The book was dedicated to "Her Royal Highness Cynthia II of Syracuse" — actually the daughter (born in the previous year, 1909) of the author's younger brother, Henry Clay "Harry" Baum.

At the beginning of this story, it is made quite clear that Dorothy Gale (the primary protagonist of many of the previous Oz books), is in the habit of freely speaking of her adventures to her only living relatives, her Aunt Em and Uncle Henry. Neither of them believes a word of her stories, but consider her a dreamer. She is undeterred (unlike her alter ego in the film Return to Oz who is much perturbed by her guardians' doubts.)

Later, it is revealed that the destruction of their farmhouse by the tornado back in The Wonderful Wizard of Oz has left Uncle Henry in terrible debt. In order to pay it, he has taken out a mortgage on his farm. If he cannot repay his creditors, they will seize the farm. He is not afraid for himself, but both he and his wife, Aunt Em, fear very much for their niece's future. Dorothy arranges with Princess Ozma to take them to the Land of Oz, where they will be safe. Using the Magic Belt (a tool captured from the jealous Nome KingRoquat), Ozma transports them to her throne room. They are given rooms to live in and luxuries to enjoy, including a vast and complex wardrobe. They meet with many of Dorothy's animal friends, including the Cowardly Lion and Billina the Yellow Hen.

The Life And Advantures Of Santa Claus

Heroes Every Child Should Know

Mary Louise in the Country

The Lost Princess of Oz